The Apartment
Sleeps 4 to 6

The apartment is located in a complex which is within walking distance of 13 kms of beautiful beaches lined by fantastic promenade walkways, on either side of the largest marina in the Mediterranean Sea .
The complex consists of well tended private gardens, tennis court, 5 a side football area, boules court, table tennis, basketball area and a large swimming pool and paddling pool
The terrace is South facing and commands extensive views to the sea, the marina, the Sierra Nevada mountains, and the Punta Entinas Bird Reserve


GETTING TO THE APARTMENT:
AIR Flights into Almeria are offered by

AIR Flights into Malaga are offered by

AIRPORT TAXI SERVICE:
- Te Llevamos / We take you to -


ALMERÍA
An Oasis in the Desert of Civilization
Almeria capital and its province, in the South of Spain, belong to the community of Andalusia, bordered on the north by the provinces of Granada and Murcia, on the west by Granada and the Mediterranean on the south and "south west".
The climate of Almeria is "sub tropical" Mediterranean with moderate summers, warm winters and clear luminious skies throughout most of the year. There are some 3,200 hours of sunlight with an average annual temperature of 18 ºC.
Desert and sea accompany the most productive and fertile market garden area of the whole European continent. 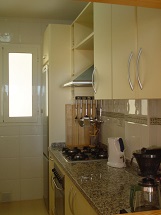